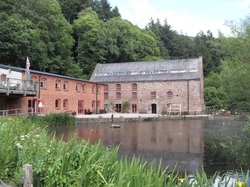 The Archive
The Dean Heritage Centre in the Forest of Dean houses the archive of Dennis Potter's scripts, manuscripts and notebooks dating from the early 1960's up to the time of his death. This exceptional collection includes hand written first drafts of iconic works such The Singing Detective and Pennies From Heaven, as well as subsequent drafts, and production scripts, as well as uncut transcripts of interviews. There are also copies of several unpublished works. The collection is housed in the centre's Gage Library and is currently being catalogued by centre staff and local volunteers.

The Exhibition
Following the specially created audio trail in the centre you can gain a deeper insight into the Forest of Dean, which was such an important place in Potter's upbringing and a vital influence on so much of his work. The trail also includes interviews with people involved in the productions, Melvyn Bragg, and interviews with local people.  The trail culminates in an exhibition that gives further details of Potter's life, work, and impact on British popular culture. There is also a recreation of a late 1950's sitting room as described in Potter's 1962 non-fiction work The Changing Forest.

The purchase of the collection and the setting up of the exhibition was the result of a partnership lead by the Dean Heritage Centre working with Voices in the Forest, and the University of Gloucestershire. The main funding was provided by a grant from the Heritage Lottery Fund and the Rural Development Programme England via a Local Area Grant.

Like all art, film and television are children of their times.  They have the capacity to reflect or comment upon contemporary social and cultural mores as well as prevailing ideologies and attitudes.  Dennis Potter was one of the few to realise this within the context of the 1950s and ‘60s, particularly in relation to the newly emerging medium of television which was all too often denigrated as mere moving wallpaper or a means to pass the time.  To Potter, television provided a medium through which he, as a writer, could express his very personal frustrations, anxieties, beliefs and desires.  It allowed him to hold a magnifying glass up to the injustices and wrongs of the modern world as he saw them and to suggest that things could be different and, indeed, better if only we were able to view them in a different, clearer light and to recognise our own agency in terms of that world’s creation.

Unlike the other arts, television enabled Potter not only to enter the living rooms of millions of people across the nation, thus creating the impression that he was addressing each and every individual on an incredibly intimate and self-revelatory basis, but also to address coalminer and Oxford don alike.  For these reasons, Potter remained faithful to the televisual medium throughout his career, completing forty titles for television in comparison to nine feature films, four novels and three original stage plays.  With such figures in mind, it is only natural that Potter’s impact has been felt most keenly within the realm of television and it seems equally natural to assume that the focus of any future research within The Dennis Potter Archive will be placed upon his television dramas but it is vital to acknowledge the many links between those dramas and other cinematic, journalistic, literary and/or theatrical texts.  The Dennis Potter Archive will assist greatly in such endeavours.

Potter’s work for television essentially combined the best elements from what were generally thought to be two very disparate worlds, i.e. the supposedly elite world of the self-expressive and often subversive arts and the populist and therefore democratic world of television.  The result was a significant and highly unique body of work which challenged all previously held assumptions about the nature of television; a body of work which pushed the boundaries of television drama in terms of form as well as content and which addressed the individual on an intimate and seemingly self-revelatory basis.  This work was sometimes amusing, frequently shocking and discomfiting but always enthralling, gripping and inordinately memorable.  Mention the name of Dennis Potter and one is regaled immediately with endless accounts of Bob Hoskin’s rendition of The Clouds Will Soon Roll By in Pennies From Heaven (BBC, 1976), of the way in which a dreary hospital ward suddenly came to life to the sounds of Dem Bones in The Singing Detective (BBC, 1986) and of how the dormant sexuality of adolescent schoolboys was first awakened by the sight of a scantily clad Gina Bellman undulating seductively to the hitherto anodyne theme tune from Desert Island Discs in Blackeyes (BBC, 1989).  Such moments have quite clearly become embedded in the nation’s collective memory but they exist also as canonical moments in the history and development of television in general.

The Dennis Potter Archive offers a unique insight into the making of these collective memories and, ultimately, into the making of film and television history.  It will hopefully provide clues as to the various creative processes which informed Potter’s work, hint at Potter’s thoughts in relation to those creative processes and to the ways in which external pressures may have influenced those processes and point towards previously unrecognised links between seemingly unrelated works.  It will definitely re-contextualise those works amongst those that eluded publication or production, thus providing a fuller picture of Potter’s oeuvre, allowing us to question the ways in which that oeuvre has been remembered and to reassess the messages and overall legacy with which Dennis Potter’s name should be associated.